Does this surgery have any side effects or not?

The result of this operation is so much dependent on the cooperation of both sides, the surgeon and the volunteer. If the exercises are done enough and regular physiotherapy sessions are held, the result is guaranteed by the center.

How long after the operation can the volunteer walk completely normal?

It depends on the amount of the Limb Lengthening that can be approximately answered in the following table: 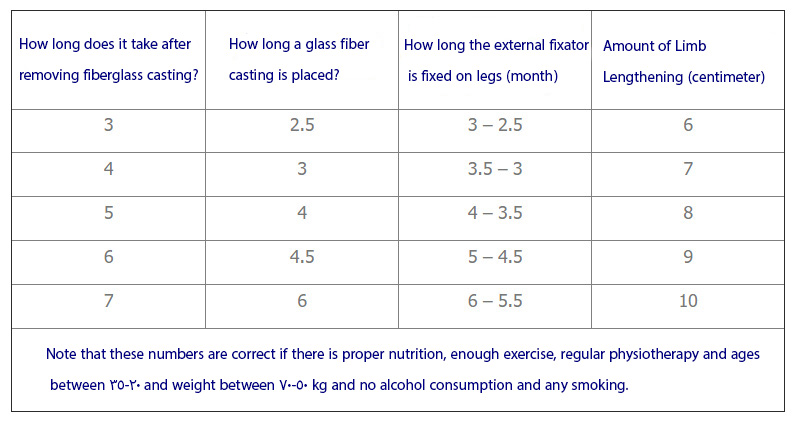 How much does this surgery cost?

Due to the importance of various factors in determining the amount of costs, ask this question to the main expert of the center, Ms. Rahimi (09123436352-0214401057), who will be completely responsible for all these important information.

Are there any side effects in this method?

If the surgeon uses the right technique and has enough experience, there is nothing to worry about.

How much Limb Lengthening is possible maximal?

7cm.
And if the volunteer needs more Lengthening, the cross method is available.

What does the cross method means?

How much is the amount of pain during the period of Limb Lengthening?

The amount of pain is much less compared to the methods that we use External fixator and there is no pain at all for most of the lengthening duration.

Is it necessary to do physiotherapy during the period of Limb Lengthening in this method?

(MTN method)
Yes. Basically, the amount of strengthening and stretching exercises required to Limb lengthening has nothing to do with the type of device used.

Will there be any scars left on the skin?

When a volunteer can walk normally?

In the cross method, the recovery speed is twice faster. For example, for 10cm lengthening, from the beginning until the volunteer can walk without an axillary crutch, will take about 8 months. If we have this amount of lengthening only on shins, it takes more than a year for the volunteer to be able to walk normally.

When can a volunteer walk after the surgery?

From the next day after the surgery, there is the ability to walk with the help of a walker. And the volunteer can even drive after two weeks (which is not recommended).

Will there be any weaknesses in the bones in years after the operation?

No
Bone strength will be returned to normal, according to studies on volunteers who have had surgery over the past 70 years.